A new woman moved into my church and she wanted to start a book group. I’ve super missed having one and am very nostalgic for my rockin’ Ohio group. We really had the greatest group and we found a wonderful system for choosing books and it was just a wonderful time in my life.

So I went with high hopes of recapturing that.  Will I? Who knows, but let’s hope! It should be interesting and really, I have nearly 300 books in my house to read, so what’s a few more?

This month we read:

Written by: Neil Gaiman
Illustrated by: Dave McKean
Pages: 312
After the grisly murder of his entire family, a toddler wanders into a graveyard where the ghosts and other supernatural residents agree to raise him as one of their own.

Nobody Owens, known to his friends as Bod, is a normal boy. He would be completely normal if he didn’t live in a sprawling graveyard, being raised and educated by ghosts, with a solitary guardian who belongs to neither the world of the living nor of the dead. There are dangers and adventures in the graveyard for a boy. But if Bod leaves the graveyard, then he will come under attack from the man Jack—who has already killed Bod’s family . . .

Beloved master storyteller Neil Gaiman returns with a luminous new novel for the audience that embraced his New York Times bestselling modern classic Coraline. Magical, terrifying, and filled with breathtaking adventures, The Graveyard Book is sure to enthrall readers of all ages.

What did I think? I gave it “two stars” for “It was OK” on Goodreads. I just didn’t “feel it” for this book.

I don’t know why.

It had everything I should have liked. I like paranormal-y type stuff. It wasn’t really spooky, but maybe it would be to Gaiman’s intended audience. Newberry winners might not be my cup of tea, but are generally well written.

I just found the book predictable in ways that discouraged me. And for whatever reason, it just never “caught” with me like some books might. That’s all right. I think that this kind of seals the deal. I love Gaiman, he’s a great guy and a talented author. He’s just not the author for me. It happens. You don’t have to like EVERY book in a particular genre. I didn’t even think the book was terrible and I didn’t hate it. It just really wasn’t the one for me. If you are worried about the trippy weird worlds that Gaiman creates, (the man has major imagination and talent) this is not like that at all. Yes, the book deals with a kid raised by ghosts in the graveyard, but everything is fairly mainstream after that. Nothing really out of the ordinary.  Definitely no Coraline demented twists.

My book club all seemed to really like the book. Good for them. Honestly, I think that sometimes you can get great discussion if someone hates a book (not that I hated this, I just didn’t love it). We somehow came up with far more to discuss than I ever thought possible, which was good. I’m really glad for that. I love a good discussion about books!

I wonder how the next meeting will go? We shall see!

So what did I do? I’ve been really missing baking and also feeling a little stir crazy from the whole busted up ankle thing and from having locked myself in the “Mom Cave” for the last week working on my All Hallow’s Eve costume.

I surfed around my newest addiction, Pinterest for a while for inspiration. Which reminded me that I recently purchased a book that might have the directions. It did! 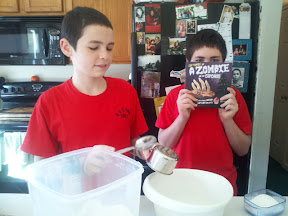 Minions of the Kingdom, gather 'round!

With my super helpful kiddos, we got to work! Bring on the baking! And the decorating!

What did we make? A graveyard of cupcakes, what else? It was “The Graveyard Book”, after all!

All it took was:

Cocoa Powder: Sprinkling this on top of the frosting gives the cupcake a “dirt like” look. It also gives an interesting flavor mixed with all that chocolate. Did I mention, DEATH by chocolate? Hello, graveyard.

Gingerbread cookies: Yay! Gingerbread is made of the win plus we got to make tombstones and crosses. Then some broke when trying to take them off the stone and that worked out well. I mean what kind of graveyard worth it’s weight in ghosts has pristine and upright tombstones? It’s all about the ambience.

For the record, I think those new fangled rolling hills with flat marker graveyards are the suck. Why on earth would I want to while away eternity in a boring place like that? I full on plan to rattle some chains.

So what did we end up with? 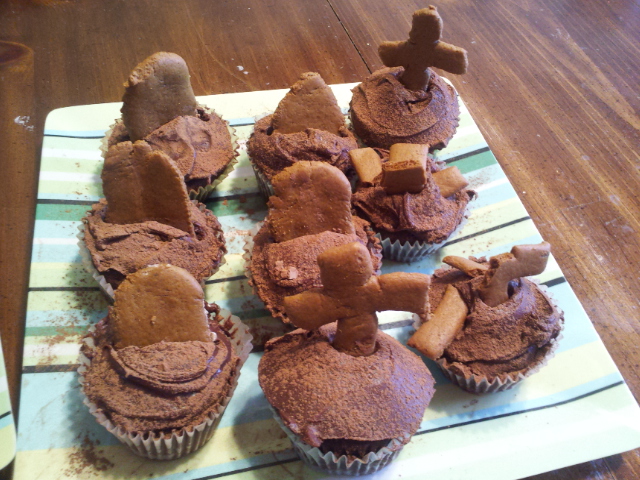 Never fear. I’ll take one for the team and investigate this graveyard.

Yup. Totally worth going in for. Yum!

PS – I’m working on the blog entry for the two books I was asked to read. It’s turning out long. I’m hoping to have it post tomorrow. It might end up being a two parter. Just sit tight. Sorry for the delays. It’s a busy week!