Written by: Alex Flinn
Pages: 304
Now a major motion picture starring Vanessa Hudgens and Alex Pettyfer
I am a beast.
A beast!
Not quite wolf or bear, gorilla or dog but a horrible new creature who walks upright. I am a monster.
You think I’m talking fairy tales? No way. The place is New York City. The time is now. It’s no deformity, no disease. And I’ll, stay this way forever ruined unless I can break the spell.
Yes, the spell, the one the witch in my English class cast on me. Why did she turn me into a beast who hides by day and prowls by night? I’ll tell you. I’ll tell you how I used to be Kyle Kingsbury, the guy you wished you were, with money, perfect looks, and the perfect life. And then, I’ll tell you how I became perfectly…beastly

A modern-day telling of “Beauty and the Beast” in the young adult world, “Beastly” is a charming novel. It does not stray far from the original fairy tale, aside from the setting of today’s NYC.

Even though it’s another retelling of an age-old story, I still enjoyed the read. Alex Flinn truly captures what it is that draws us to the classic fairy tales, and I enjoyed that this told the side of Beast.  You can enjoy watching him grow as a character over his time in beast-form. You see the struggle he goes through, abandoned by his father.

I have not yet seen the movie, though it is on my Netflix Queue. I will admit, having seen the previews of the movie, I was surprised that in the book the character is more like the Beast we know and love from the classic tales. I thought that perhaps the way the character looks in the movie previews was from Flinn’s descriptions.

The one thing I loved was Flinn’s tossing in Beast using an internet chat room to talk to other transfigured souls. It threw in an interconnecting fairy tale theme in such a modern way and I loved it. He really nailed chat lingo and put the effort into considering his characters, such as the frog prince missing letters due to his webbed froggie feet.  That is the sort of finishing touch in a book that keeps me coming back to an author’s work.

I have several other Flinn novels at my disposal. They just moved up the list to try to read as the summer days draw to a close. 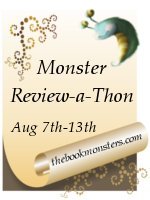 *This post is part of the Book Monster's Review-a-thon going on this week. Expect a busy blog week!*