What else can I say?

The day began like any other. The kids and I enjoyed a wonderful school day and then sat down to watch a special on TV. While watching the show, I noticed a Facebook friend entered a contest to win a free bow-tie from Southern Ties. All he needed was 40 “likes” to his photograph on their Facebook page. I did my part and told the boys to do so as well.

Then they noticed, the company planned to give away five bow-ties! Since the boys love bow-ties, they were all in. What came next was a crazy couple of hours where we worked at entering them and getting them the requisite “40 likes”. I’ll tell you, it got a little tense around here as the company announced bow-tie winner after bow-tie winner.

In the end, my bows won. Just in the nick of time.

Thanks to all of you that helped in your various ways. My boys are crazy happy!

As it turns out, Southern Ties is a local Fredericksburg, Virginia company! We received the ties in two days, which is pretty impressive. Here’s what happened:

My boys emailed their bow-tie preference and a representative of the company personally delivered the ties to our front door. That’s the Southern quality for you right there. 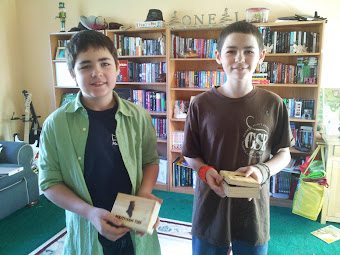 The bow-ties came in these very nice wooden boxes with the Southern Ties logo burnt into the lid. 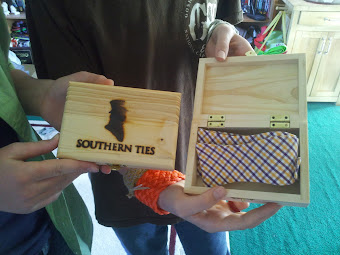 A close-up for better detail

I gotta admit, that’s pretty impressive. I like it!  Note, the representative also gave the boys stickers with the logo, but I don’t know what happened with said stickers.  I like stickers. 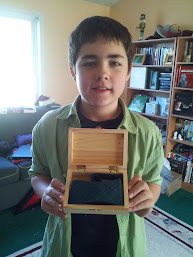 Sadly, the company was “sold-out” of the tie Joram wanted, orange and navy. He chose the gold and purple tie, and loves it. Caramon chose blackwatch which I’ll admit is one of my favorite plaids. 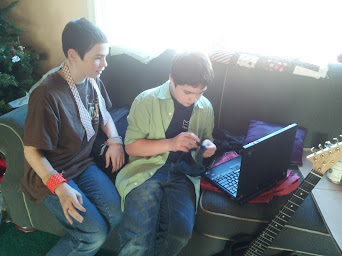 Yes, Caramon happened to be in the middle of guitar practice when the bow ties arrived. I am pretty sure the rock star rocking the bow-tie will be a super awesome look. 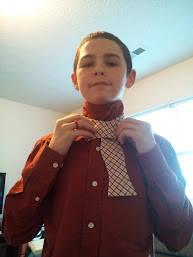 What we learned: Bow-ties aren’t the easiest thing to tie. A lot of the video tutorials we watched ended up with the actual creation of the bow itself obscured by hands. We finally figured it out! Thank you, interwebs!

So how do my boys look in their new bow-ties? Studly: 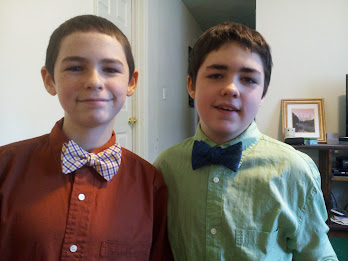 Back off, girls, or Mama's gonna get ya!

Interesting note, these awesome shirts? Total score at the Kohl’s about a week before.  Serendipity!

Also, Mama Ozma is not afraid of threatening any and all girls that get any ideas. Mess with my boys and incur the wrath of me. I’ve got flying monkeys and I’m not afraid to use them!

You can always trust your Doctor’s advice: