I think I cycled through every one of those about 13 times on Friday, buying our new car. I will freely admit that I don’t spend money well and suffer from horrendous buyer’s remorse. Often that remorse comes before we even make a purchase.

At this point, we’ve gone through this process several times in our marriage. However, this time was completely different. Not only did we have the ability to spend some time truly looking at vehicles and researching what we wanted, but I used the power of the internet to get real-people reviews on vehicles as well as “professional”.

The most exciting difference is that I  was not alone in car hunting. Saturday I receive a text message: What kinda car did y’all get?

Turns out one of my friends was in the market as well. I don’t think I’ve ever bought a car “with” someone else before!

We decided this was just too cool so what else do you do? Car play-date of course!

It's a car play date!

Aren’t our cars cute next to each other? That’s what I thought!

Car play-dates are far quieter and less messy than kid play-dates. No whining for more french fries, no ketchup in the hair, no whining about sharing. Instead you get two girls geeking out over their awesome new rides.

Guys would get together, pop the hood, and start grunting out garbage like “torque” and “horsepower”.

Our cars definitely play well together!

Marie looking hot next to her blinged out new ride!

Climb inside for a peak at the 2011 Toyota Highlander SE. Be warned, it has a “metric crap tonne of awesome features! ”

Most important to any girl checking out a new car – cockpit! 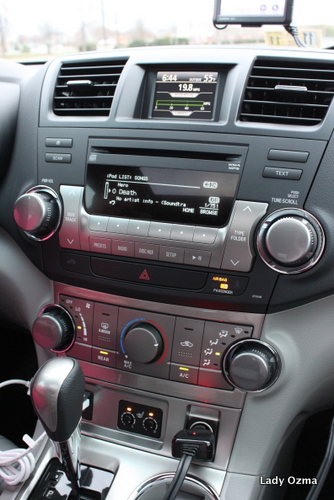 Dials and buttons and screens, oh my!

This isn’t your mom’s taxi. You’re looking at more buttons and knobs and power outlets than ever! She’s got everything a girl could want: Satellite radio for listening to Martha, heated seats to combat the low iron freeze-out, bluetooth for safe gabfest when stuck in traffic, and a port for the iPod.

Best of all, that little screen at the top? Totally a back-up camera. Absolute must have. I cannot say it enough, I’m grateful the government made these bad boys a requirement!

More cupholders than you know what to do with!

The Highlander comes with a whopping TEN cup-holders. That’s right. Ten. Sadly, no built-in toilet to help you deal with all that liquid you’re imbibing! 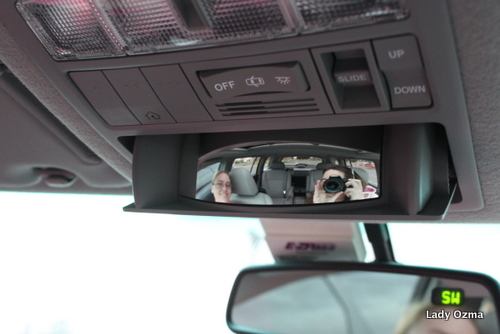 Toyota calls this the “conversation mirror”. Poppycock! It’s totally the spy on your kids mirror. Besides you need to be able to give them the death glare when they are hitting each other or claiming something strange like “he’s looking out my window!”

I’m not talking from experience or anything. My kids are perfect.  I know, you are jealous. Deal with it!

Moonroof for the win!

Built in Moonroof! Let the sunshine in!

The car goes on forever!

Seriously, it’s like forever to get to the back! Check out that nice little console between the two bucket seats. Utter swank! Especially because you can remove it.  Why would you remove it?

To put in a child seat/third seat of course!

Easy to swap out!

I don’t know about you, but I want things like this to be easy peasey. And this is!

And for the organizational junkies (AKA We’re so NOT OCD but really we are)  – it has its own stow space! 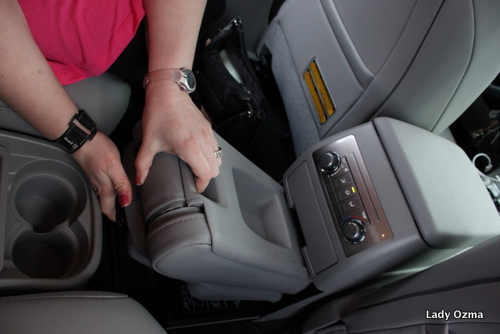 Now a busy gal might have her hands full of shopping and want some quick access to the trunk – and the Toyota Highlander offers that with the glass window opening to give you just that! Nice perk! 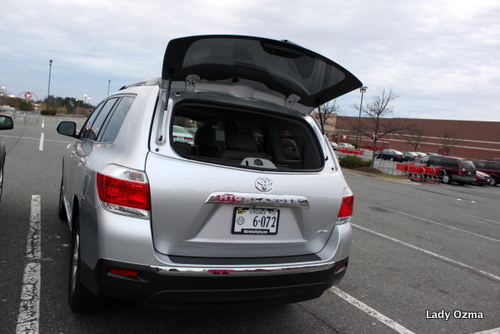 With a power lift-gate standard, opening the back of your Highlander is an absolute breeze. You get a third row seating to allow for up to seven passengers.  The seats all lay flat though, so when you need the cargo space the size of a small country, you have it! 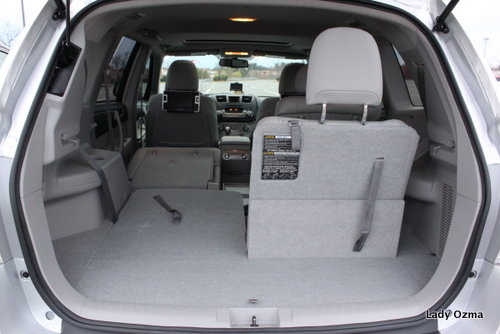 You get a third row or a crazy amount of cargo space!

Best of all, the Highlander took into account that the Highlander *might* become a Mom-Mobile. You can’t always be running all around your car trying to lay the seats down. Voile – levers to make those middle seats fall right down included!

The seat levers in the trunk to release the middle seats to lower.

I love the power lift-gate. Did I mention it already? You get a button on the lift-gate itself: 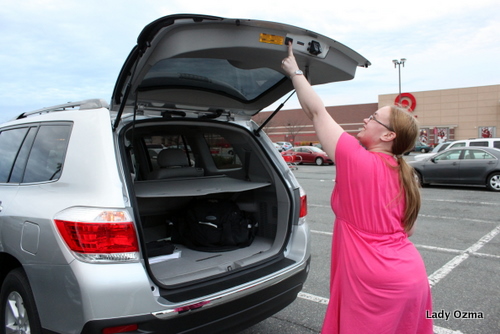 Push this button and the power lift-gate will close itself.

Or you can use your keyfob:

Highlander keyfob at your disposal!

The Toyota Highlander Crossover SUV truly has that promised “metric ton” of features! She’s enjoying her ride and I loved taking a “tour” with her! It was so exciting to get together and do the girl version of a car geek out! It even helps to get you all excited so you can forget the looming millenia of car payments since all cars are worth about eleventy billion dollars these days!

**Disclaimer** We have in no way received anything from Toyota for creating this fun car play date. This was just two girls having a great time and enjoying their cars.**