A few weeks ago, the East Coast of the United States of America (and parts of Canada) rock ‘n rolled to the tune of a 5.8 earthquake.

I know that doesn’t mean much to most people, but it means a lot to us.

One reason is just the make up of our dirt. Everything comes back to dirt, right? I happen to like science, but to keep from being real technical or anything – just trust me. It’s our dirt. (Or as we like to call it, ‘good ol’ Virginia red clay’.) Our dirt just carried that shifting and shaking for hundreds of miles. Even if it wasn’t a super high magnitude quake, that’s pretty interesting.

I think most people don’t realize what that quake meant to those of us close to the epicenter where it rocked the most. We’re not Christchurch after their 6.3 or Haiti after their 7.0. We’re not even Japan after the 9.0 that gripped the world in a state of disbelief earlier this year.

Lucky for us, the epicenter of our quake was a more rural community.  That said, it was only a few miles from a nuclear power plant and in a region with very old buildings.

Those that grew up here, we know we live on a fault line, albeit it a fairly quiet one. We know that roughly every 100 years (as close as one can truly estimate Mother Nature’s tantrums) we get an earthquake worth writing about. We expected this one (as much as one can expect any natural disaster).

In historic Fredericksburg, childhood home to George Washington and a site of multiple bloody battles during the Civil War, are buildings whose structural integrity is equivalent to popsicle sticks held together with scotch tape. Makes you feel safe when contemplating the rocking we just went through. (*Note, I promise, they WERE safe before the quake. Engineers made sure of it.*)

DC landmarks made the news. I’m still scratching my head over the Washington Monument. The mere thought of that gives me the willies. Standing under the tall obelisk, or sitting for a picnic in its shade is just normal to me. Now closed due to quake damage at the tip, it leaves one imagining part of the monument tumbling to the ground below. That’s like the alien invasion movie or something. Yikes!  The National Cathedral also sustained major damage with shocking photographs.

One site that I expected better footage on was the Washington DC Temple for the Church of Jesus Christ of Latter-day Saints. I received word shortly after the quake that spires fell from the force of the temblor.

Most people not from DC don’t care, but for those of us living here, the Temple is a landmark. It is used in every single traffic report. You can see the spires from several miles away as you drive down the beltway.  I remember the first time I saw it, I thought it looked like a castle in the sky. (*Note – I was not a Mormon at the time.*)

Here’s a real no-brainer though. Those spires are gold and pointy. Multiple spires broke off and fell to the ground, one taking out chunks of marble from the facade of the Temple.

Hello, scary? It’s probably a miracle that no one was seriously hurt. At least one length measured four feet. Wow.

So where’s the impressive footage? The news reports?

Lady Ozma wants to know, but maybe I’m the only inquiring mind.

Off I went last week, leaving early enough to ensure a proper amount of daylight and photography time.

When I pulled into the parking lot, I realized why there was almost no mention of the spires.

YOU COULD NOT TELL.

The DC Temple is actually the tallest of all US Temples (take that Salt Lake!) and the easternmost spire is 288 feet tall. (That’s 88 meters for my international friend.)

The spire next to Moroni is now a little bit shorter than before.

Still, looking through my zoom lens, I could see the blunt end of the spires. I will admit to you, just looking at the Temple from the ground? You really need to stare at the Temple to notice this. A crane stood in front of the building, apparently removing a leaning spire tip and assessing the situation. I decided to forgo a full Temple photo. However, I did snap some of the spires through the zoom lens. Just for you.

I promise, that spire used to be pointy!

The Angel Moroni stands with his trumpet, and I always like to think he’s calling people to the Temple. That’s how it felt for me when I saw the DC Temple for the first time. He needed a little bit of shoring up, but he’s still standing there, overlooking the Capitol Beltway. 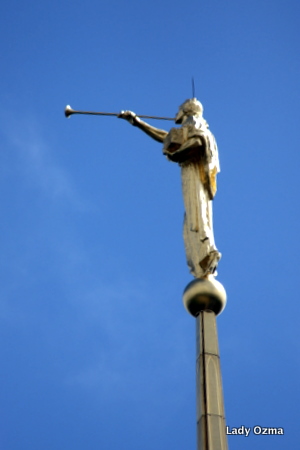 3 thoughts on “Spires Down!”