This week I took part in a challenge for design that crippled me with only utilizing Microsoft Word.  As any regular reader of mine knows, there’s not a chance that I would ever utilize Word unless someone seriously held a gun to my head and I’d still argue with them.  On no planet am I ever going to be in a position where Microsoft Word is my only option.  I ensure this eventuality will never come to pass.  I left Microsoft Office nearly 20 years ago and I can tell you now that I have certainly not missed anything.

Let’s go over the super easy various options at my disposal:

However, I wanted to be true to this challenge, dear readers.  After all, what’s the point of a challenge if you do not follow it.  This would also give me a chance to see if Microsoft Office had anything new to make me hate it less.  (The answer: nope.) I figured that without this intro, no one would believe I actually did this project in Word.

While I refuse to spend money on software I will not use, especially when excellent other options exist, I do have access Office Online. This is the new Microsoft answer to Google Docs and Pages living in Ye Olde Cloud.  Thank you X-Box giving me a Microsoft ID! Woot woot!

The story: You work for a small company (where the business owner hasn’t had you fix the computers) where you have limited funds and only have what’s on the company computer (Microsoft Office and nothing else) with which to make a flyer to promote an upcoming fundraiser.  This actually sounds pretty cool, especially since we get to use an image we scan and to make up the fundraiser! Brilliant!  (OK, Brilliant outside of…)

Without further ado, here we go… let’s check out my project! 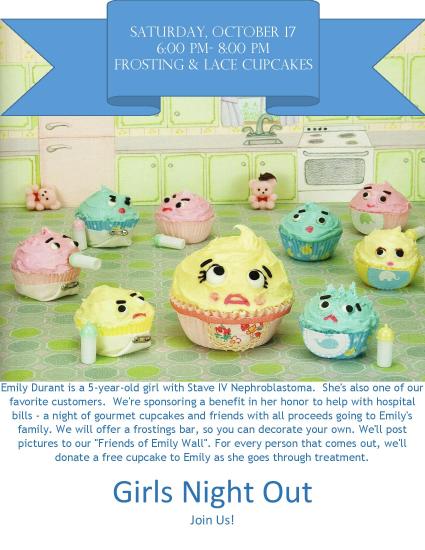 This is my very basic flyer!

First I selected this great cupcake art book, “Desperate Cupcakes” and a picture I liked from it to scan.

Stressed out Mama Cupcake with a pack of little ‘cakes. Photo from the book “Desperate Cupcakes” which you should buy and read.

Second, I went to Office Online and entered Word. I got as far as adding the picture and got called to be without internet and tech for 14 hour-long days on NDA super secret thing. Snap. Worse, at night, my internet was just that bad. For the half hour lunch break, I used my iPad with the Word app.  I used it to set everything up and then edited the final draft on my computer that night at sleepy place.  This was an interesting duo process.

Third, once my document was finished, I saved it as a PDF for printing. From there I went to PDF2JPG.net to save that file for this blog.  I only say this because I figure that information may help someone someday.

I really love the art in this book and wanted to promote/share it. Also, I just really like cupcakes. From there I came up with the idea of a cupcake bakery.  It amazes me that these exist. Since NDA redacted thing kept me busy, I liked the idea of a relaxing night out, but I needed a fundraiser. As you all know, I’m a supporter of Pediatric Cancer because of my son. A cupcake shop doing a GNO fundraiser for a child with cancer – brilliant!  I made up a shop name and a child’s name.  The form of cancer is identical to my son’s. I used pastel and blue for my color scheme, mostly because of the book and Word’s limitations.

Top thing learned: Outside of how I will never use Word by choice again? I learned that it can prove really frustrating to work with substandard software, but you can still make something that works.  It’s nice to have the power tools at your disposal, however there’s something great about simplicity at the same time that should not be forgotten.  I really didn’t like how Office online would not let me color my background or get my graphic to fill the whole page.  I also didn’t like that my ribbon color could not be changed from Microsoft Blue. I tried everything that Word itself allowed and fought the urge to use other software.

Finally, I took my flyer to the print shop.  Check out the video below: